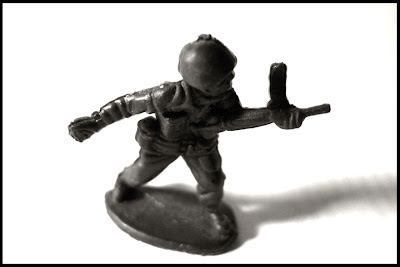 So then, what DO our artifacts say about us? We can read all sorts of things into, well, things. This was something that I found washed up on a beach in California a few years back. I used to have all sorts of these plastic army men when I was a kid, and I turned out relatively well. I think.  Still, these types of objects do speak to particular social realities and conditions, don't they? When was the last time you walked through a kids' toy section? Notice any consistent themes? Any gender-based differences in the displays and products? I always find toy sections to be pretty fascinating places, especially when particular national debates crop up.

Thanks for posting that.  It's a vivid example of the importance of artifacts--and why they are pretty fascinating to look at.  I really like the descriptions you posted--and I immediately started looking around at the room I am in, filled with books, devices, notes, pens, and other biographical bits and fragments.  Our stuff says a lot about us.  Some of this kind of reminds me of some of the projects of archaeologist Michael Shanks:

In response to Nikos' question: An old answer to the question why anthropologists study artifacts is to point out that in some branches of anthropology artifacts are, excluding fossil bone and environmental evidence, all we have to work with. A newer answer is one that emerges from what is now a quite widespread reaction against disembodied abstractions as explanations for human behavior. In classic Aristotlean terms, rational thought may distinguish human from other beings; but rational thought is grounded in animal, vegetable and material realities that must also be considered in trying to decipher what it means to be human in any particular time and place. Artifacts, things made and used by humans for purposes of their own, may be particularly useful when pursuing this quest.

On a more personal note, I have reached an age when, if I ask who I am, the answers readiest to hand are in the spaces in which I spend most of my waking hours and the artifacts with which they are filled. The books are veritable archeology of intellectual meanderings that have taken me in many directions. The gadgets speak to a geekish involvement with technology, channelled into a passion for the latest stuff from Apple.  I look up from my computer and see the tanuki (Japanese raccoon dog) doll that my daughter made for me when she was nine. Below it hangs a marvelous kite in the shape of a giant butterfly that she bought me during her first deployment as a U.S. Navy helicopter pilot. Turning left, I see the front page of the Asahi Shimbun, a special issue published to announce the victory of Barack Obama in a presidential election campaign in which I was deeply involved. Below it is a picture taken just before Ruth and I left Middlebury, Vermont for our second trip to Taiwan. Ruth is holding our daughter, a newborn baby. In the baby sling that I am wearing is a large watermelon. These things are a midden, a palimpsest, an assemblage, a bricolage that reminds me of who I am and how I came to be this way. No one could understand me without taking note of these things and knowing what they signify.

Well, it depends on what people actually DO with these things.  To me, they are pretty clearly references to violent pasts--but what kids do with them is another matter.  Such objects are certainly, at least as I see it, reflections of past wars, conflicts, and violence.  So what do they DO?  Do they teach kids about war?  Do they glorify war?  Do they normalize military conflict?  Or do they just sit in the toy box on the floor and do nothing much at all?  Answering those kinds of question, IMO, is where something like ethnography or archival research comes into play.

To me plastic soldiers are interesting little material objects that definitely tell us something about contemporary culture.  Imagine if someone found an archaeological site that had thousands of clay figurines that were clearly warriors all throughout the site.  What would that tell us, if anything, about those people?  What inferences could we make?  And how might we be lead astray with our interpretations?

Overall, I am not really trying to make any definitive statements...just kinda wandering through the idea since it came up the other day.  Sometimes I post stuff online just to think out loud, so to speak.

That's a good way of putting it.  One group focuses on humans, the other, on STUFF.

Comment by M Izabel on January 25, 2011 at 1:13am
Nikos, for now, I cannot answer your question as I'm still trying to gather some stuff I find difficult to get hold of.  My next blog post will be on deception, misinterpretation, and the economy of objects, things, and stuff that leave archaeologists and material culturists helpless and irrelevant.

Comment by M Izabel on January 25, 2011 at 12:44am
Although I'm not fond of a radical idea in material culture studies, I think the vanilla kind is useful in studying/analyzing a cultural element in a different perspective.  For example, a statue of a spirit, to archaeologists, means a belief system of a people or a culture of myths and rituals.  To material culture experts, it can be technology, art, concept, and knowledge of a people or a culture that makes and uses it.

You're being cerebrally funny lately, Nikos  :)

Thanks for making me think, Ryan.

"And what if I am a collector of toy soldiers having 150 in my collection ? Is that a sign of my violent character or a sign of an archaelogist collecting artifacts ?"

"It's up to the material culture scholars to define 'artifact'".

As I see it, archaeologists and ethnographers are equally scholars of material culture--some just happen to look at older stuff.  An object doesn't have to be old to qualify as an artifact--it just has to be produced, used, or understood by a human agent (to use some clunky terminology).  In short, artifacts are objects that people put to use in one way or another--and are therefore pretty fascinating to study.  Still, we have to be careful about equating function, form, and meaning.

"As far as I'm concerned, I like how archaeologists use its sense in "artifactual material," a material that says something about a people or a culture and merits a thorough study and analysis."

As someone who started off in archaeology and then gravitated toward cultural anthropology, I agree with you.  I would argue that even small things like toy soldiers tell us quite a lot "about a people or a culture" and therefore merit "a thorough study and analysis."

"I do understand your usage of "artifact" that is synonymous to "object"; thus, using your line of thought, all objects are artifacts."

Not at all.  Rocks are objects.  They become artifacts when people pick them up and use them--whether for cooking, making stone tools, or throwing through a neighbor's window.  Artifacts require some sort of human intervention.

"The idea that a toy soldier is an artifact of violence, to me, suggests that it is the product or remains of a culture of violence, which is not the case."

It MAY NOT be the case, but it can be the case that a toy soldier reflects a larger culture of violence (or reverence of war, etc).  I'm not sure why you want to make such definitive declarations about this.  It seems pretty open and dependent on context if you ask me.

There you have it.  It all depends on an expanded understanding of context.  it also depends on definitions of key ideas and terms, in this case violence.  Anyway, thanks for the comments.

It's up to the material culture scholars to define "artifact"  As far as I'm concerned, I like how archaeologists use its sense in "artifactual material," a material that says something about a people or a culture and merits a thorough study and analysis.

I do understand your usage of "artifact" that is synonymous to "object"; thus, using your line of thought, all objects are artifacts   Now, replace "artifact" with "object".  "Object of violence" is far from "artifact of violence."  I use "artifact" as a product and remains of a culture. I think the simplicity of Activity Theory can help us define what an artifact is.

The idea that a toy soldier is an artifact of violence, to me, suggests that it is the product or remains of a culture of violence, which is not the case.  Even a boy in peace-loving Bhutan, the so-called happiest place in the world, played toy soldiers.

Of course, a rope is an artifact of violence if you contextualize it in history and appropriate it in geography.  Among the Black Americans in Alabama, where lynching happened in the old days, those ropes still attached onto trees or captured in photos are artifacts of violence.  Among cave explorers, ropes left in forest caves are artifacts of spelunking.

"I don't know where this condescension towards functionalism comes from.  Every facet of human existence-- from his cellular tissues to the gigantic structures he builds-- is functionalist."

Nah, don't read this as in any way condescending toward functionalism--my point was that a purely fuctionalist understanding only gets at part of the picture.  But it's an important part--or it can be.  But the nominal function of something doesn't always tell us everything we need to know.  Function and meaning/actual use don't always align all that neatly.  Forks are for eating, except for when they're used as toys in sandboxes.  Meanings shift, despite our categories and expectations.

"However, a (bloodied) lamp, for example, can be an evidence of violence but not an artifact of violence.  There is a sense of generality in 'artifaction.'"

Your definition of artifact is a bit more restricted than mine.  In a collection of murder weapons, should we only count objects that were designed for violence as artifacts of violence?  That doesn't make much sense to me, considering what people do with ropes, plastic bags, shovels, axes, and so on.  You call it evidence, and to me it seems pretty safe to call all of these artifacts of violence.  Also, any artifact can of course exist within numerous functional, semantic, and practical categories.  A shovel and be used to commit murder--or to put in a new drain line in your backyard.

"If we allow an outside non-users, analysts, and interpreters to define a cultural object, artifact, or material, we will have multiple descriptions and definitions and they will go on and on."

So, in your view, the only ones who know what toys really mean are the children who play with them?  To me, that's a pretty limited way of looking at things.  Sure, a kid might not know that they are playing with a toy that depicts a Vietnam era US soldier, and might not even think about the object in that way.  And that makes sense.  But that doesn't obviate or efface some of the other references and meanings of the same object.  As I see it, there is never going to be anyone who can claim to have a monopoly on truth...especially when it comes to objects, which can have numerous competing meanings all at once (within AND between social groups).