﻿ ﻿﻿﻿﻿﻿﻿﻿Writing last week about 'Periodic flowering and circumcision cycles', I was reminded of a trip to the slopes of Mount Elgon in July 1992, to belatedly negotiate bridewealth payments. One day we saw a group of boys singing and dancing in the open, and I was told that they were novices preparing for circumcision, which takes place in August every second year. My notes on this trip are sprinkled with reference to the years in which my male in-laws were circumcised, and in some cases the topical names that these years were given, such as Nandege (1960, named after an aeroplane that often flew overhead at night, waking people up), and Namirundu (1976, referring to the guns used by Idi Amin's firing squads). These were important marks of men's identity, reflecting the centrality of male circumcision in local Gisu (Masaaba) culture. I'd long been aware of the psychological effects of this, and earlier in 1992 had asked a young male relative to write notes for me on the practice of circumcision among the Bukusu, on the Kenyan side of the border (Wepukhulu 1992).

When I first read Timothy Wangusa's Upon This Mountain (1989), a novel about troubled transitions to manhood in Bugisu (one young man evades the cut and is forced to wear women's clothing, another has the operation furtively in hospital), I thought it captured the local obssession with circumcision perfectly. It's no accident that Suzette's Heald's ethnographic studies (1998; 1999) and film (Hawkins and Heald 1988) have made much of the violence of male circumcision and the ways in which it engenders an ethos of violence in turn. Homicide rates are unusually high, the Gisu are widely feared, and in the past were rumoured to be cannibals. Uncircumcised men are warned that they visit Gisu and Bukusu country at their peril when the biannual rites are underway, and the newspapers are never short of stories of forcible circumcision when every other August comes around. 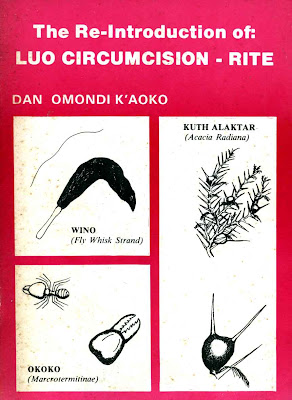 Which brings me round to an extraordinary book that I bought in Nairobi in 1987, Dan Omondi K'Aoko's The Re-Introduction of Luo Circumcision - Rite (1986). The Western Nilotic Luo live to the south of the Gisu, Bukusu, and other Bantu-speaking Luhya, and are best known for not practising circumcision. But K'Aoko sets out to demostrate that some Luo are familiar with male circumcision, and to this end details a number of traditional methods for performing the operation. Chapter by chapter these are:

I'll refrain from spelling out the painful and gory details of each of these. You can read all about them in the version of the book that was posted online in 2008 with the simpler title Luo Circumcision Rites. I'm no expert on President Obama's ancestors and their initiation rites, but suspect that at least some Luo must be under pressure from their Luhya neighbours to adopt circumcision. I knew a young educated Ganda man who booked himself into hospital so that he could be circumcised and live more comfortably with his Gisu mother and her family, and wouldn't be surprised to learn that there are also cases like this among the Luo.

More recently, though, Luo have been urged to take up circumcision for very different reasons. Gisu and others who practise male circumcision have long claimed that it is 'cleaner' and protects against sexually transmitted diseases, and this has played a role in the unwillingness of their womenfolk to sleep with uncircumcised men from other ethnic groups. Numerous studies have now shown that male circumcision significantly reduces the risk of infection by the HIV virus as well as other STDs (e.g. Weiss et al. 2000; Auvert et al. 2005; Gray et al. 2007), and this has led to programmes in Kenya and elsewhere to promote the practice. In July 2008 the Luo Council of Elders refused to endorse a Ministry of Health campaign to provide free circumcison services in Kenya's Nyanza Province (Anon. 2008). In September five prominent Luo politicians, led by Prime Minister Raila Odinga, countered by declaring in public that they had secretly undergone the operation, and five other MPs pledged to do so subject to medical advice (Telewa 2008). This bold challenge to cultural tradition seems to have had an immediate impact on take-up of the government's offer, though resistance to circumcision continued. Large numbers of Luo have turned to male circumcision to prevent HIV/AIDS, rather than to revive the ancestral practices that K'Aoko claimed, or submit to the cultural compulsion that exists where the cut outnumber and intimidate the uncut.

Hawkins, Richard and Suzette Heald (dirs.) 1988. Imbalu: Ritual of Manhood of the Gisu of Uganda. Videotape distributed by the Royal Anthropological Institute.